Auction Buyers Are Catching on to African-American Art 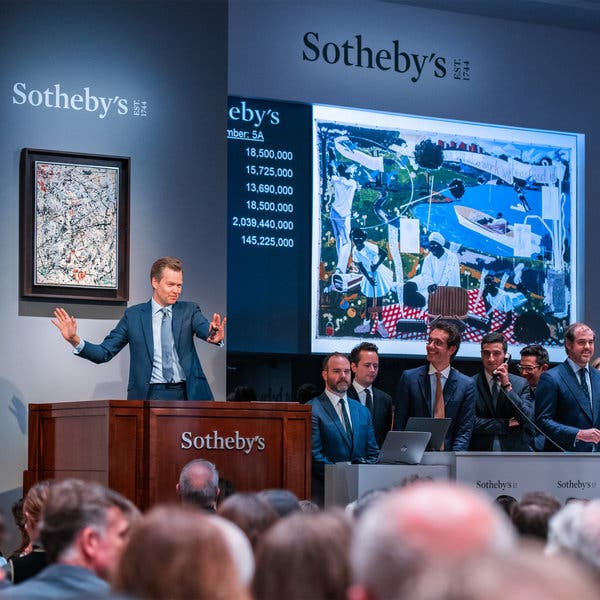 Auctioneer Oliver Barker, taking bids at Sotheby’s for Kerry James Marshall’s painting “Past Times.” It was eventually sold for $21.1 million with fees.

Auctioneer Oliver Barker, taking bids at Sotheby’s for Kerry James Marshall’s painting “Past Times.” It was eventually sold for $21.1 million with fees.CreditSotheby's
By Scott Reyburn
May 25, 2018

LONDON — “I don’t need to tell you, sir, how great this is,” said Sotheby’s auctioneer Oliver Barker last Wednesday evening, leaning over his rostrum and trying to coax another eight-figure bid out of the New York dealer David Zwirner for Kerry James Marshall’s 1997 masterwork, “Past Times.”

Moments later, Mr. Barker knocked the lot down to one of three telephone bidders for $21.1 million with fees. A wryly updated “fête champêtre,” showing black suburbanites relaxing in a Chicago park, had just set an auction high for any work by a living African-American artist. The painting was bought by the Grammy Award-winning rapper and music producer, Sean Combs, better known by his former stage names Puff Daddy and P. Diddy.

For many, this sale was by far the most significant moment in the latest biannual series of auctions of Impressionist, modern and contemporary art in New York. But what did it signify?

“That and other results signaled that finally African-American artists are regarded as having the same historical value and price points as their peers,” said Todd Levin, a private dealer and adviser based in New York, who last year curated the exhibition “Power,” devoted to African-American female artists, at Sprüth Magers in Los Angeles. “It also signaled an intensification of activity among African-American collectors,” Mr. Levin added.

As Mr. Levin suggested, there were plenty of other results last week that suggested a surge in demand for African-American art. Sotheby’s Wednesday evening contemporary sale began with five works by leading African-American artists sold to raise money for a new building at the Studio Museum in Harlem.

“Speak, Birdman,” a freshly completed mixed-media abstract by Mark Bradford, was pushed by as many as a dozen bidders to $6.8 million, more than double the presale estimate. Last week, the Broad museum in Los Angeles announced that it had been the purchaser of Mr. Bradford’s 12-foot-wide 2007 abstract, “Helter Skelter I,” which sold in March at Phillips for $12 million — the previous auction high for a living African-American artist. In the same announcement, the Broad said it had also bought a new painting by Mr. Marshall.

Sotheby’s Studio Museum fund-raising lots also included “Bush Babies,” a 2017 work by the admired but rarely available Njideka Akunyili Crosby, whose works usually sell to museums. This set a salesroom high for the artist of $3.4 million. A few lots later, a 1974 full-length portrait “Brenda P” raised a new auction benchmark of $2.2 million for Barkley L. Hendricks, whose art had been foregrounded in last year’s “Soul of a Nation: Art in the Age of Black Power” show at Tate Modern in London.

The auction market is belatedly reflecting re-evaluations that have been going on for some time in the museum world. Driven by seismic shifts in cultural politics, scholars and curators have challenged the fixity of the West’s artistic canon, rehabilitating neglected talent from a range of communities and cultures. 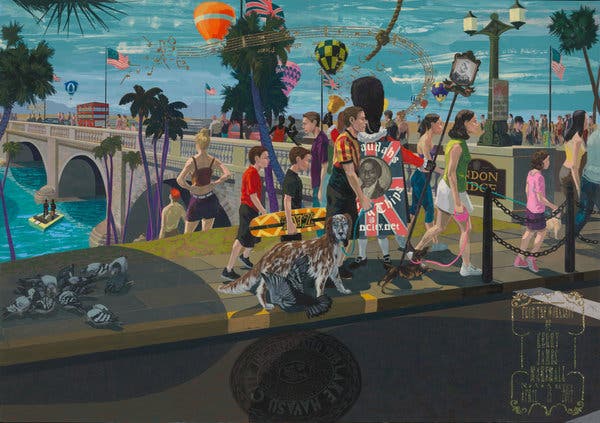 “This has meant looking beyond figures such as Pollock, Rothko, Warhol and Lichtenstein toward African-American artists working in the same period,” added Mr. Godfrey, who co-organized Tate’s “Soul of a Nation” exhibition. He said that it was part of Tate’s “curatorial vision” to “rethink narratives of art history.”

Mr. Godfrey added that when acquiring works by living artists such as Mr. Bradford and Mr. Marshall, “We learn that Jack Whitten was as important to Bradford as Jacques de la Villeglé, or that Charles White was as significant for Marshall as Velazquez.”

Similar shifts in curatorial emphasis can be seen at numerous museums across the Western world. From Feb. 15 to May 13, the Seattle Art Museum, for example, showed “Figuring History: Robert Colescott, Kerry James Marshall, Mickalene Thomas,” an exhibition of works by three generations of contemporary African-American artists who challenge “a Western painting tradition that underrepresents people of color,” according to the museum’s website. The show coincided with the museum’s current loan display of the 1982 Jean-Michel Basquiat painting, “Untitled,” which sold last May at Sotheby’s for $110.5 million — an auction high for any American artist.

The total of $2 billion for this latest week of evening and day sales — 25 percent up on the equivalent sales last year — seemed to proclaim the rest of the art market was also on a high, particularly after the previous week’s $832.6 million Rockefeller auction at Christie’s.

But these biannual seasons of New York auctions rely on individual trophies to set the tone, and the headlines. This time round, apart from Mr. Marshall’s “Past Times,” there was little that generated any serious salesroom excitement.

On paper, the artwork of the week should have been Amedeo Modigliani’s 1917, “Nu Couché (Sur le Côté Gauche),” which Sotheby’s offered in its Monday evening sale of Impressionist and modern art with an estimate of $150 million, the highest yet placed on any lot at auction. It sold to one bid from its guarantor for $157.2 million.

“The weight of expectation, hype and marketing is distorting the market,” said Hugo Nathan, co-founder of Beaumont Nathan, an art advisory company based in London. “The results feel disappointing, and yet the prices are still huge.”

After the gargantuan $450.3 million given in November for Leonardo’s “Salvator Mundi,” works selling for tens of millions can now seem anticlimactic.

There was an air of routine the following evening at Christie’s auction of Impressionist and modern art when Constantin Brancusi’s 1932 polished bronze portrait of the shipping heiress Nancy Cunard sold for $71 million and Kazimir Malevich’s 1916 “Suprematist Composition” for $85.8 million, auction highs for their respective artists. Both works were guaranteed and estimated at $70 million.

“The financial deals have pushed the numbers to a point where there’s not a lot of room left on the upside,” said Neal Meltzer, an art adviser based in New York.

By contrast, at Phillips contemporary sale on Thursday, the 1984 Basquiat acrylic and oilstick on wood slat painting, “Flexible,” fresh from the artist’s estate, sold to a telephone bidder for $45.3 million, double the estimated price.

Two lots earlier, Pat Steir’s radiant 1992 drip painting, “Elective Affinity Waterfall,” sold for $2.3 million, an auction high for this long-overlooked American painter. The 12-foot-wide canvas — offered, like the Basquiat, without a guarantee — was valued at $600,000 to $800,000. It had been owned by the foundation of the New York philanthropists Manuel D. and Rhoda Mayerson since 1994, when not many people had heard of Ms. Steir — or, indeed, Mr. Marshall.

“If you can get works that are great quality, fresh to the market and attractively estimated without being encumbered by any presale financing, then this is how you create auction magic,” said Melanie Clore, a partner at Clore Wyndham, art advisers based in London.

The principles of the auction market remain the same. But at least the names are being freshened up.