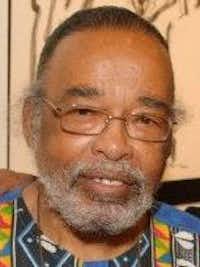 Frank Frazier
Locally and internationally recognized visual artist Frank Frazier was breathlessly rushing to the airport Tuesday when I reached him by phone to talk about his latest project. He was on his way to pick up several fellow artists coming to Dallas for the venture.

Frazier is a founder and guiding force behind the ninth annual Southwest Black Art Show & Festival, which will be from 11 a.m. to 5 p.m. Friday through Sunday at the African American Museum, 3536 Grand Ave., inside Fair Park.

The free three-day family affair will feature more than 20 local and national African-American and African visual artists and include activities for all ages. Original works will be on sale. Some artists will receive prizes including future solo exhibitions and the purchase of one of their works.

The museum and its Junior Associates organization are hosting the show and festival under the theme "We Are Who We Are."

Frazier, who was born in Harlem, N.Y., in the 1940s and has lived in Dallas since 1980, led creation of the festival in 2010. The self-taught talent began painting at age 7. He has been heralded internationally for stunning works that incorporate vibrant colors and African cultural themes depicting the energy and motion of his subjects. His works, which include oil paintings, Kente cloth collages and sculptures, have been featured in movies such as Coming to America, Waiting to Exhale and Bustin' Loose, as well as in TV shows and books.

The Vietnam War veteran has passionately advocated for visual artists throughout his career and often uses his art to express his feelings about social and political topics, including war, drugs, teenage pregnancy and civil rights.


Frazier and other organizers note that this year they have increased participation of female artists by 75 percent. Women make up half of artists in this year's show, a turnaround from their traditional under-representation.

"It's important that we make a change and get more women artists telling their stories," Frazier has said.

The event will include workshops for folks who want to learn what to look for when collecting art; hands-on activities; and presentations by authors, gallery owners, scholars and even tattoo artists. Featured artists include Dallas' Desmond Blair, who was born without hands and drew national media attention as an adolescent described as a child art prodigy; Fanta Celah, a jewelry designer, model and jazz singer; Nychelle Elise of Baltimore; Jonathon Romain, and Najee Dorsey.