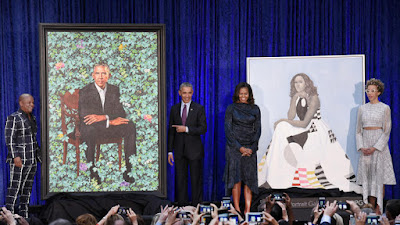 Amy Sherald once waited tables at the Baltimore Museum of Art.
Today she's a trustee, with collectors and other museums clamoring for her work after unveiling her portrait of Michelle Obama at the National Portrait Gallery earlier this year.
Black artists, long overlooked and undervalued, now occupy one of the hottest corners of the market. Famous buyers have included hedge fund managers Ken Griffin, Steve Cohen and Jim Chanos, major museums, and CNN's Anderson Cooper.
"It's such a watershed moment," said Lisa Melandri, executive director of Contemporary Art Museum St. Louis, which will host Sherald's first solo museum exhibition next month. "It realigns the canon of art history."
Unlike trends that tend to fade after a year or two, black art has been sustained by unparalleled museum support. The gold rush is playing out from Sotheby's, where billionaire Yusaku Maezawa paid $110.5 million for a Jean-Michel Basquiat canvas last May, to sold-out exhibitions and art fairs worldwide.
U.S. institutions are realizing their collections have largely overlooked the black figure.
"It's a bit of a mad scramble," said Todd Levin, a New York art adviser. "They're all aware that they have been behind the curve in supporting, collecting and exhibiting work by African-American artists and they're all making tremendous expenditures to make sure there's more equal representation."
Perez Art Museum Miami established a $1.1 million fund, with backing from billionaire Jorge Perez and the Knight Foundation, that will allow it to acquire black art in perpetuity, no matter who's in charge, said museum director Franklin Sirmans.
The Museum of Modern Art in New York acquired more than 430 works by black artists since 2010, according to Ann Temkin, the chief curator of painting and sculpture.
"They're part of a very rich and textured history that we weren't really committed to exploring," Temkin said. Now museums have to "literally pay for the fact that we weren't as actively engaged in this a decade ago." 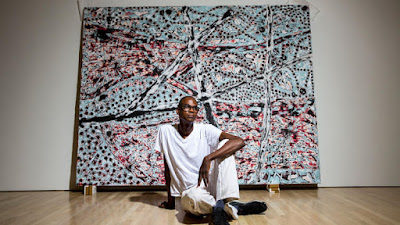 Los Angeles-born artist Mark Bradford is photographed in front of "The Next Hot Line." This piece is part of his show "Scorched Earth," installed at the Hammer Museum in Los Angeles in 2015. Black artists, long overlooked and undervalued, now occupy one of the hottest corners of the market.
(Jay L. Clendenin / Los Angeles Times)
This week, MoMA got a big break. Chris Ofili's "The Holy Virgin Mary" -- an elephant dung-adorned canvas depicting a black Madonna -- entered the museum's permanent collection, thanks to a gift from Cohen, a MoMA trustee. The painting -- made famous in 1999 when then-New York Mayor Rudy Giuliani tried to have it banished from an exhibit -- fetched $4.6 million in 2015, an auction record for the British artist.
In December, MoMA also received "Tomorrow Is Another Day" -- a 2016 painting by Los Angeles artist Mark Bradford -- as a gift from Griffin, the founder of Citadel. "Helter Skelter I," a Bradford painting inspired by serial killer Charles Manson, was acquired earlier this year by the Broad museum for $12 million, an auction record for the artist. The seller was retired tennis pro John McEnroe.
In the past decade, Swann Auction Galleries in New York, which sold $5.3 million of African-American art in 2017, launched hundreds of black artists at auction and established records for major figures, including Abstract Expressionist painter Norman Lewis.
"It's a backlog of talent," said Miami collector Mera Rubell. "You're looking at four generations of black artists."
Take Sam Gilliam, 84, a Color Field painter in Washington. A decade ago, his auction prices were in the "embarrassingly low" $10,000 range, said Nigel Freeman, Swann's director of African-American fine art. Since 2014, auction sales increased 662 percent, totaling $2.5 million last year, according to Artprice.com.
Sotheby's sold a Gilliam in September for a record $684,500. In January, Robert Mnuchin's Upper East Side gallery, better known for selling Warhols and de Koonings, hosted a solo show for the artist.
David Zwirner, one of the world's leading galleries, recently started working with Kerry James Marshall of Chicago whose prices hit a record $5 million at auction in November, following an acclaimed retrospective that visited the Metropolitan Museum of Art. Portraits by Barkley Hendricks, who died last year, also are in demand, with auction revenue up 2,400 percent since 2014. 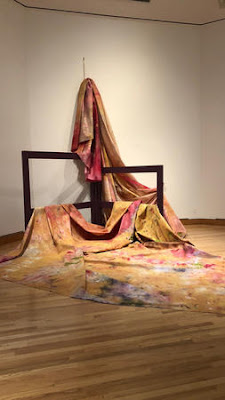 A piece by Sam Gilliam was recently acquired by Williams College Museum of Art.
(Katya Kazakina / Bloomberg)
"Collectors are very interested in what artists of color have to say now," said Jack Shainman, whose gallery represents Hendricks. "For many years it didn't matter."
Among those drawn to these narratives is CNN's Cooper, whose eclectic collection of mostly figurative art ranges from Old Master canvases to hand-painted, wooden barber signs from East Africa.
In recent years Cooper added works by several black artists to his collection, although he said he doesn't view black art as a collecting category. He owns an abstract painting by Bradford, which incorporates pieces of paper from his mother's hair salon and Nathaniel Mary Quinn's collage portraits of the residents of Chicago housing projects where he grew up.
"The work seems a genuine reflection of their past , present and view on society," Cooper said of the artists he admires.
The Studio Museum of Harlem, led by Thelma Golden, has been the launching pad for many black artists. Rubell, the Miami art collector, and her husband Don helped drive greater acceptance in the U.S. In 2008, their foundation featured three generations of black artists in "30 Americans." The exhibition crisscrossed the country, visiting 11 museums, with five more scheduled through early 2020. Most of the featured artists became international sensations.
Emerging black artists starred last month at the Armory Show, New York's biggest contemporary art fair, where Nicodim Gallery sold out of paintings and sculptures by South Africa's Simphiwe Ndzube on the first day, with prices ranging from $20,000 to $40,000.
"The world has fallen in love with black artists," said Rubell, who bought a multi-media installation by Ndzube. "They have a powerful story to tell."
Posted by Arthur L. Dawson at 12:09 PM