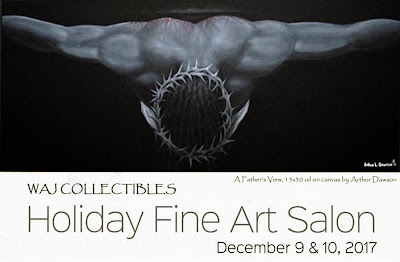 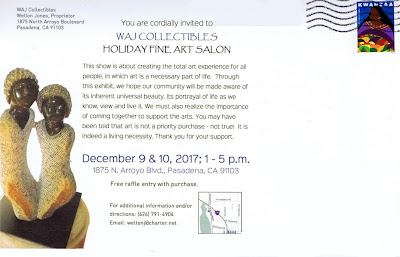 Posted by Arthur L. Dawson at 1:06 PM No comments:

The Museum of African Contemporary Art Al Maaden in Marrakech
The Museum of African Contemporary Art Al Maaden in Marrakech Simo Drissi
A private museum in Marrakech plans to relaunch next year, coinciding with the opening of the city’s inaugural 1:54 Contemporary African Art fair, in a bid to attract international attention to Morocco’s art scene. The Museum of African Contemporary Art Al Maaden (Macaal), which is located on the outskirts of the capital, was inaugurated in November 2016 during the United Nations climate change conference (COP22) in what it describes as a “local launch” and will invite international guests on 24 February to see its programming.
“Touria El Glaoui, the 1:54 fair director, and I linked up together to launch both our initiatives at the same time to ensure maximum impact to the international art world,” says Othman Lazraq, the president of Macaal. The not-for-profit museum is funded by Othman and his father Alami Lazraq, named by Forbes as one of the wealthiest men in Africa, who together run the property development company Groupe Alliances, the largest builder of hotels in Morocco. The museum project is part of the company’s charitable Fondation Alliances, and houses the Lazraq’s 2,000-strong collection of Modern and contemporary African art.

The original charcoal drawing titled, "Do No Harm." Do no harm, is part of the Hippocratic Oath historically taken by physicians. Hippocrates was considered by many to be the father of modern medicine. The drawing represents the study of medicine and the medical symbol! Hope you like it.
#medicalart #artwork #art #arthurdawson #medical #contemporaryart 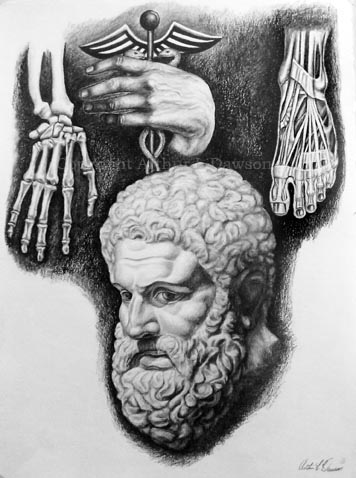 Posted by Arthur L. Dawson at 5:26 PM No comments:

What I did during Irma....Sketched in my sketchbook..."Boys Will Be Boys"

Several friends have requested a copy of the #BoysWillBeBoys print. To get your copy, click this link or got to www.arthurdawson.com. 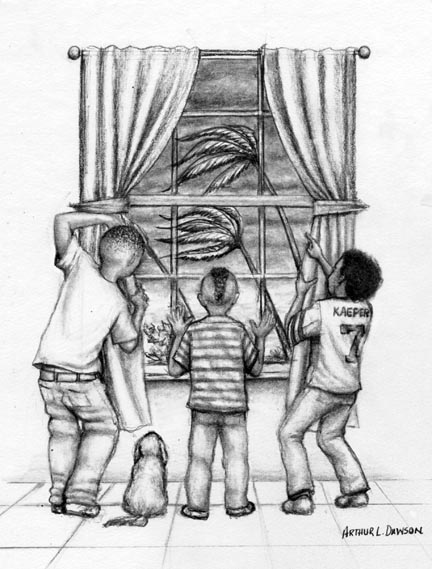 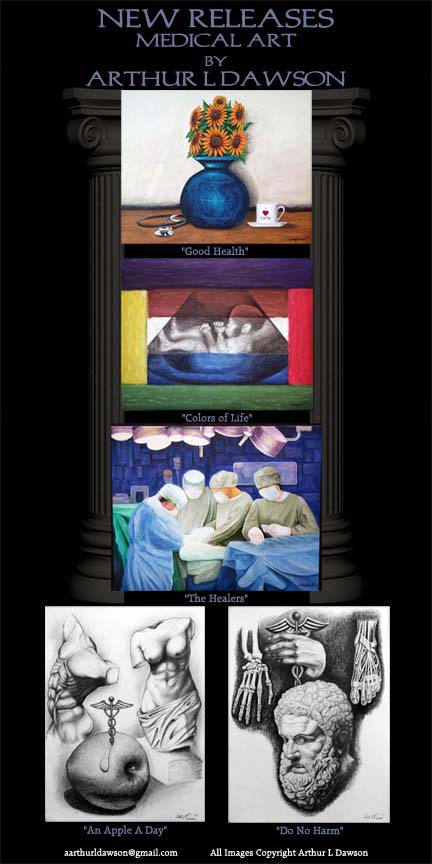 Posted by Arthur L. Dawson at 4:43 PM No comments:

Posted by Arthur L. Dawson at 4:08 PM No comments: 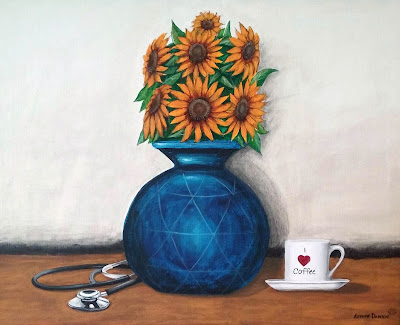 Posted by Arthur L. Dawson at 3:39 PM No comments:

According to one report, Tallahassee, Florida, is the “art buying capital of the U.S.”

Kathleen McAvoy is an avid art collector. From portraits to abstract pieces, she's been buying art for 30 years. McAvoy said her Blairstone Forest home looks more like an art gallery, studded with captivating abstracts and tiny watercolor cityscapes.
The most recent piece to adorn her wall? A painting of a mysteriously silhouetted woman, riding a horse through stormy waters and into a misty forest.
In the past few years, the retired state worker has ventured online to buy art. She's ordered about 50 pieces online from Artfinder.com, an online art marketplace.
Topping Miami and even New York City, a report released last week by Artfinder found Tallahassee to be the "art buying capital of the U.S."
Broken down per capita, proportional to each city's population, Tallahassee came in with 1,303 artwork sales made through the Artfinder website in 2016, the report states.
The data was based on Artfinder sales in proportion to city population per million, said Jane Verity, Artfinder public relations manager. For Tallahassee, that number was 0.188 million — derived from the approximately city's population of 188,000.
The capital city made it just above New Haven, Connecticut, which had 953 sales per million people.
Bigger cities are more "saturated" with art — "where you're surrounded by art everywhere," said Artfinder CEO Jonas Almgren, so buyers in smaller cities like Tallahassee may encourage buyers to search online art.
So why are many Tallahassee art connoisseurs turning to the internet to buy art?
McAvoy says it's because she has more access to a variety of art styles, right at her fingertips.
What does this suggest about Tallahassee's art market landscape — outside of the internet?
Tallahassee's filled with art collectors, buyers — and artists, of course.
Mary Maida, owner of Signature Art Gallery — which has been showing and selling local art for more than 20 years — says the art market here is strong. She's seen it grow since 1996 when the gallery first opened.
"The Tallahassee art market is strong due to the universities, the sophisticatedness of a large segment of the population that appreciates art," Maida said.
"I think probably in the last several years as businesses like Artfinder offer imagery that's readily available, while a lot of people may not buy art online, it still increases exposure to what is out there in the world," she added.
Saatchi Art, Etsy and Daily Paintworks are other websites that sell original artwork.
Brinda Pamulapati is a newer art gallery owner in town. She opened Venvi Art Gallery on Park Avenue in 2015 and is impressed by the strength of the city's art buyer base.
Pamulapati says she has seen a core of regular customers form at the gallery.
There are many artists living in Tallahassee, she adds, which attracts collectors.
Some days, she admits, her gallery sees very few patrons than other days. But she's "very hopeful and very positive" about the local art market, because of organizations that are helping increase awareness of the arts like the Council on Culture & Arts, she said.
"I think we're definitely positioned to really explore this creative economy," said COCA Executive Director Audra Pittman.
"Technology makes it easier for a lot of people to not only put their work out there but to filter according to their interests [when buying]," Pittman said.
Along with an online artist directory for art buyers to sift through, COCA offers tools for local artists to be more visible in the community.
One of those is the monthly "Artpreneur" coffee-talk series at the PowerPlant. The sessions train working artists to become entrepreneurs and advocates of their art businesses.
"I think it's quite a representative sample of a general art interest," Almgren said about the report. Almgren suggests that buying art online, allows Tallahassee residents to be part of the global marketplace.
"Suddenly you can be anywhere and have more access to both artists and art, and I think this enables people to be art collectors."
Contact Nada Hassanein at nhassanein@tallahassee.com.
Posted by Arthur L. Dawson at 6:50 AM No comments:

Posted by Arthur L. Dawson at 5:22 AM No comments:

mars 12, 2016  STUDIO FEDORA
New Yorkers have the chance to attend this Thursday, March 17th, from 6-8 PM the opening reception for Barkley L. Hendricks’ second solo exhibition with the Jack Shainman Gallery. Featuring new oil and acrylic paintings, Hendricks will showcase his most political works to date with a brand-new touch of realism and pop culture.
Little did we know that would be our last chance to attend an opening reception with the living artist, Barkley L. Hendricks.
the  hashtag headline today reads,
#BarkleyHendricks #RIP #jackshainmangallery
It is with great sadness that we announce that Barkley L. Hendricks passed away this morning.  He was 72 years old. He is survived by his wife Susan of 34 years.

The Artist Barkley L. Hendricks Has Died at 72

"He was a true artist’s artist,always dedicated to his singular vision; he was a figurative painter when it was trendy and especially when it wasn’t," said Jack Shainman in a statement.
Barkley stood out as an artist well ahead of his time. Kehinde Wiley and Mickalene Thomas and other of today's black figurative artist did not blaze the trails they walk on. When they looked straight ahead, they could see the backside of Barkley in front of them. He whacked the path.
Photo by Chris Hildreth

His life-size portraits of fabulously attired black men and women were his visions from the 1960s, ’70s, and early ’80s. Before
the 60's there was no, black body in pop culture.,

because there wasn't any pop culture.
In the 80's figurative art fell out of grace and conceptual art began to dominate the art market. Barkley turned to photography and painting landscapes as he rode out the next two decades. until  there was a ...
Rebirth of Cool

"Barkley L. Hendricks: Birth of the Cool," a major, five-decade retrospective in 2008 organized by Trevor Schoonmaker, chief curator of the Nasher Museum of Art at Duke University, renewed appreciation of his career and its impact.
Hendricks's work could not be easily defined by the art industry and he insisted on maintaining his individuality. Because of that he paid a price, it kept him outside of the public's awareness for too many years. Despite his being a lone soldier, his pioneering vision moved the next generation ...

Today Barkley’s body of work is as fresh and vibrant as ever, and the impact he made through his art and teaching is only beginning to be felt. This summer he was to participate in Soul of a Nation: Art in the Age of Black Power, at the Tate Modern in London from July 12 to October 22, 2017.  This is a fruit of his long career he will never taste.

My personal opinion:
this younger generation of school trained artist are reaping from the low hanging fruits they did not plant, they have no stand out vision.  The hope for the next innovative art expression lies with the next generation of visionary artist and if they fail to provide vision, there will be no future fruits to reap and the light will go.

but for now, another soldier down ---
#BarkleyHendricks #RIP

From the "Skateboard Fine Art Series" 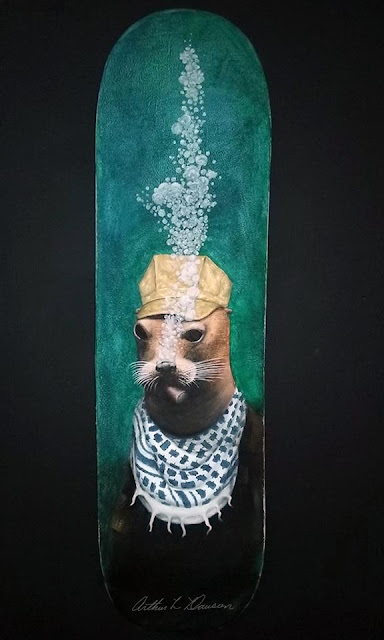 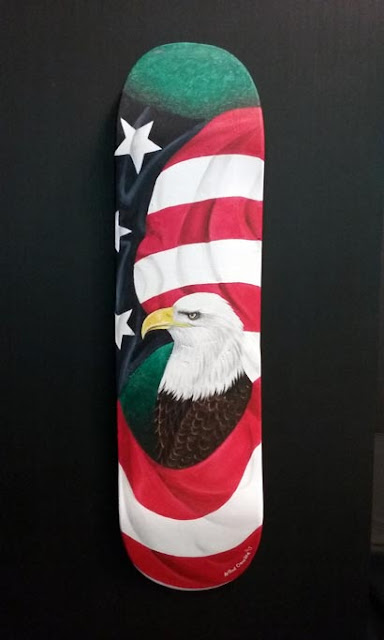