At MOCA North Miami, a Battle Not Over Race -- But Control.

MOCA is currently in the middle of a tug of war between the museum board and the city. At the center of the controversy are two directors, Babacar M'Bow and Alex Gartenfeld appointed to do the same job. The current situation at MOCA, is of profound interest because it will impact the Contemporary Art World in one way or the other -- why?  Because a man of color is standing his ground for control of the Directorship of the Museum of Contemporary Art.  This stance is forcing MOCA's Board of Trustees to answer for their actions.  What was once reserved for the Board's discretion will now have to be publicly debated.
From the different articles we've read and the people we've talked with, this is what we can make out. The MOCA Board of Trustees claims that  . . .
To see the MOCA LAWSUIT IN FULL
BEFORE WE COULD PUBLISH THIS ARTICLE THERE WAS A breaking story from the Miami New Times

According to the Miami New Times article -- the heated legal dispute between the Board of Trustees of North Miami"s Museum of Contemporary Art (MOCA) and the City of North Miami over who controls the museum's collection and whether it will be relocated from its current home to Miami Beach's Bass Museum may have finally come to an end.
BABACAR M'BOW has been confirmed as the new Director of the MOCA

Speaking on condition of confidentiality, the source described the points allegedly agreed upon by MOCA board members and city officials. Among them is the confirmation of Babacar M'Bow as the museum director and the departure of 150 top works of art from MOCA's holdings along with its outgoing Board of Trustees.
THE DECISION WAS SWIFT AND ALL POINTS OF THE SETTLEMENT WERE IN THE FAVOR OF THE CITY OF NORTH MIAMI.
But this is not reflected in the headline of the Miami New Times article: MOCA Allegedly Reaches Agreement With North Miami: M'Bow Stays, Trustees to Leave With Artworks.
According to the source these are the settlement points in the agreement,
THE BOARD OF TRUSTEES FAILED TO DEFEND ANY OF THEIR ASSERTED CLAIMS.   It has been interesting witnessing how the mainstream news sources reported this conflict. In the light of fairness, they, for the most part, reported the story from a cautious, neutral position. But built into that cautious, neutral position, is the underlining assumption that the Board of Trustee's case was the more meritorious of the two.  The City of North Miami and Mr. Babacar M' Bow were assumed to be disenfranchised and somewhat radical.
BLACK ART IN AMERICA attended the symposium, sponsored by the Florida Africana Studies Consortium, “What Happens When Politics of Class and Culture Collide,” at the embattled Museum of Contemporary Art (MOCA). We were able to talk with BABACAR M' BOW before the decision was handed down.  The interview is very telling of the timber of the man, Mr. M'BOW.

ST. PETERSBURG — Arthur Dawson is an artist that takes the seemingly mundane moments of life and brings a new vision into them. His diversity of materials can range from bold acrylic color to soothing watercolors, and then his hand can shape clay, wood and metals into glorious sculptures. 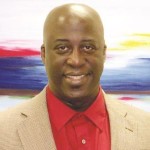 “I work in all mediums, it just depends on the subject matter,” he explained. “Life inspires me. I’m always looking out for anything I find cute, funny or serious.”

Dawson feels that each person personally interprets art. He was insistent that no one should tell you how to view art and that art “speaks a different language to each person. My approach to art is something that can’t be termed,” he said. “I use unorthodox methods to achieve my goals.”

Dawson compares most of his artwork to emotions. He described his piece “Royal Motion” as a circle of life or direction.  In “Praise and Peas” it is the feeling of joy and in the drawing “Blue Line,” Dawson explores the emotions of joy and pride within the genealogy and history of the black race. 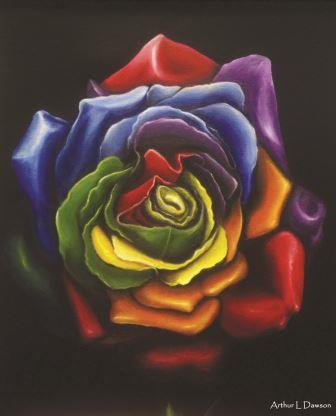 He began drawing at the age of six when he and his two older brothers sketched and wrote their own comic books. Young Arthur’s comic was called “Super Arthur.”  Through the years his work has been exhibited nationally including Daytona Center for the Arts and the Jenkins House in West Palm Beach.

In 2006 he founded Youth Arts Program (Y.A.P.) in Orlando.  The word “yap” is slang for talk and that’s what the program is designed to do: “get kids talking or yapping about arts.”  It is a 40-week program for grades 6-12 that gives children in underserved areas an opportunity to be exposed to the creativity of art. The curriculum includes courses in painting, sculpting, graphic and textile design and cartooning.

His latest project, “Artist Creations Cookbook,” features culinary recipes and artwork from nationally and internationally known master artists. His interest in cooking was ignited at an early age. After his father and mother divorced, he and his brothers were basically raised by their father and were instructed in cooking, washing, and cleaning. “He wanted to make sure we could take care of ourselves,” Dawson explained. Soon Arthur saw the connection between artwork and the preparation of family meals. “I saw creation in the kitchen.”

The book came about when Dawson painted a piece he called “Just Right” in 2000. It shows a chef savoring his latest, tempting creation, confirming the deliciousness that seems promised. 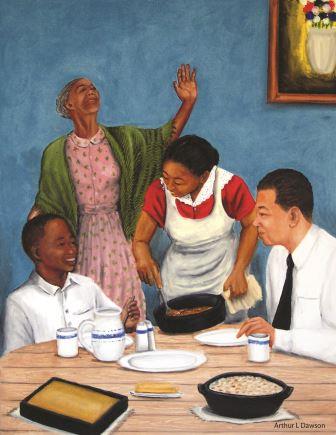 Then in 2013 he began to produce the book that partnered both his love of cooking and his artwork.  Dawson discussed the development of the book with his friend and fellow artist Larry “Poncho” Brown who was excited by the concept.  He immediately stated that he wanted to be part of the book and to have his own artwork and personal recipe included.

Brown was also instrumental in reaching out to other artists about the book.  The culmination was the collaboration of 27 artists’ paintings and recipes from around the world including Ghana, Nigeria, Segal, Haiti, and Jamaica. Some of the renowned artists include Jonathan Green, Paul Goodnight, Gilbert Young, and Annie Lee among others.

“My desire is for people to understand their position in humanity,” Dawson stated. “Art binds us together through life and passion. I see the world through artistic value.”

Show on African homosexuality shut down after fundamentalist attack

Senegal exhibition, part of the Dak’Art Biennale, closed due to pressure from extremist Islamic groups

The Nigerian photographer Andrew Esiebo’s ongoing series “Who We Are” portrays gay men from Lagos
The Senegalese government has shut down one of the first exhibitions in Africa to focus on homosexuality on the continent. The move comes several weeks after an attack on the Dakar gallery by Muslim fundamentalists, says the French-Algerian artist Kader Attia. “Precarious Imaging: Visibility and Media Surrounding African Queerness” opened at Raw Material Company on 11 May, but a day later, the non-profit art centre was vandalised and the building damaged, according to Attia, whose video about the lives of transsexuals in Algiers and Mumbai was included in the show. No one was hurt in the attack.
See also:
Following pressure from extremist Islamic organisations, the exhibition, which was part of the informal programme for Dak’Art 2014, the 11th Biennale of Contemporary African Art (9 May-8 June), was cancelled on 31 May. According to the news service Times24.info, the Senegalese government also ordered the suspension of all exhibitions in the biennial that refer to homosexuality. Raw Material Space remains closed, according to a spokeswoman for the biennial, who could not confirm if any further exhibitions had been shut down. “Senegal is well-known for its peaceful and moderated Islam. Such an aggressive attack is absolutely unexpected, as is the government’s decision to shut down all the exhibitions in the biennial that deal with homosexuality,” Attia says. “It is highly concerning that a country that has always been protected from fundamentalism is now opening the door through an official path.”The aim of the “Precarious Imaging” exhibition, which was co-organsied by Koyo Kouoh, the artistic director at Raw Material Company, and the independent curator Ato Malinda, was to shed light on a persecuted African minority. Homosexuality is illegal in Senegal, as it is in 37 other African countries, according to Amnesty International. Malinda told The Art Newspaper in April that a leading academic had advised the gallery against holding the exhibition. “The show will cause controversy, but we will not censor ourselves,” Malinda said at the time.Alongside Attia’s video, the exhibition featured photographs of gay men from Lagos by the Nigerian artist Andrew Esiebo; a photographic series of black lesbian and transgender women by the South African activist and photographer Zanele Muholi; a video of Egyptian women smoking by the Egyptian-American artist Amanda Kerdahi M.; and works from Jim Chuchu’s “Pagan” series. Raw Material Company could not be reached for comment at the time of publication.
Posted by Arthur L. Dawson at 4:18 AM No comments: