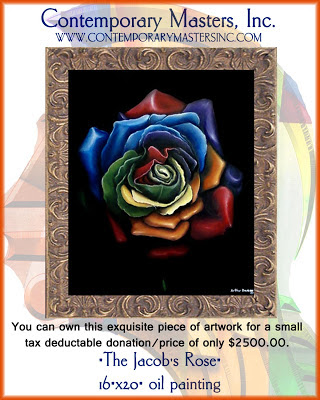 Posted by Arthur L. Dawson at 6:47 PM No comments: 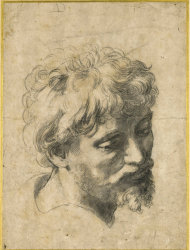 
LONDON (AP) -- One of the most significant drawings by Italian master Raphael in private hands sold for 29.7 million pounds ($47.8 million) in London Wednesday, smashing pre-sale estimates for the black chalk work.
"Head of an Apostle" was expected to fetch between 10 million pounds and 15 million pounds, and Sotheby's auction house said the sale set a record for any work on paper sold at auction.
Sotheby's said the winning bid was placed over the phone following an intense battle among four bidders.
"Head of an Apostle" was created in preparation for Raphael's Biblical painting "The Transfiguration," which hangs in the Vatican Museum in Rome.

"If you are lucky, at some point in your career a work like this comes along," said Gregory Rubinstein, worldwide head of Old Master drawings at Sotheby's.
He called Raphael — who died in 1520 — a genius.
The piece had been part of a collection at the Duke of Devonshire's Chatsworth House home in Derbyshire since the 1700s.
Posted by Arthur L. Dawson at 1:33 PM No comments:

Art history and evolution can be learned in a way that most other things in the world cannot: by looking on the magnificent, classic, and historic pieces with your own eyes. As artists, we all have dreams and aspirations. As your dreams grow and your life becomes a realization of your dreams, make it an intention to try and visit at least one of these museums in your life. Seeing a masterpiece in person is very different from seeing a picture in a book or on the Internet. The following museums are the top in the world, and they are unique works of art even unto themselves, much less the wealth of artwork that they keep safe from the marching of time. We hope you have a chance to experience these great human works; you will certainly walk away a changed person.


1. Le Louvre
Louvre Museum, or simply Le Louvre, is the most visited art museum in the world, as well as a historic monument. It opened on August 1793 and displayed 537 paintings. Today, nearly 35,000 objects from prehistoric times to the 19th century are exhibited over an area of 652,300 square feet. It is housed in the Louvre Palace, which was the royal place of the King of France from the 12th century until King Louis XIV moved the throne to the Palace of Versailles in 1682.


2. Vatican Museums
Vatican Museums, located inside the Vatican City in Rome, was founded by Pope Julius II in the early 16th century. It acquired its first piece, the sculpture of Laocoön (the priest who supposedly warned ancient Troy against accepting the Greeks’ hollow “gift” horse), in 1506. Today, it display works from the enormous collection built up by the Roman Catholic Church, including masterpieces from the Renaissances.


3. The British Museum
The British Museum is a museum of human history and culture in London. It was founded in 1753, mostly from the collections of the scientist Sir Hans Sloane. Like other publicly funded national museums in the United Kingdom, the British Museum is free of charge for admission. It is located in Great Russell Street in London and displays about 7 million objects.


4. The Egyptian Museum
The Egyptian Museum, inaugurated in 1902, is located in Cairo, Egypt. It displays 120,000 items altogether. These include numerous artifacts – including mummies and personal treasures of famed Pharaohs – from Egypt’s storied history. During the 2011 Egypt protests, the museum was broken into and two mummies were damaged.


5. Museo de Prado
The Museo del Prado is located in Madrid, Spain. It features one of the world's best collections of European art from the 12th century to the early 19th century. The museum opened to the public for the first time in November 1819. It was designed on the orders of Charles III in 1785 for the purpose of housing the Natural History Cabinet. Currently, the museum is displaying less than 1,000 works in the main building and lending around 3,100 pieces to many different institutions around the world.
Posted by Arthur L. Dawson at 5:51 PM No comments: